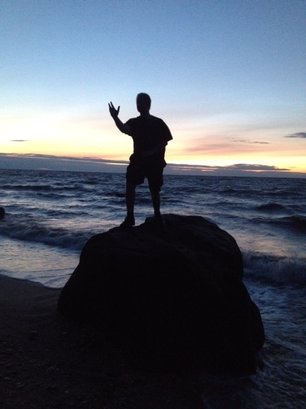 The dual lineages coming together through Dong Xuisheng is fascinating, and helps explain the unique expression of Xing Yi Quan in this style.

​Dong was a practitioner of traditional Chinese medicine and spent most of his life traveling in Northern China studying martial arts and treating patients. He was a Xing Yi student of Geng Jishen (disciple of Liu Qilan), Li Cun Yi, and Liu Wen Hua.  Liu Wen Hua was the son of Liu Qilan who was one of the most famous disciples of Li Luoneng (Li Nengran), the creator of what we know as Xing Yi Quan (shape-Intent boxing), a martial art derived from Dai family style of Xin Yi.  Dong Xuisheng also learned Ba Gua from his friend Sun Lutang. All of these teachers were from Hebei province.
​
Dong Xuisheng was also a disciple of Song Hucheng of Shanxi province. Song Hucheng's father, Song Shirong, was a disciple of Li Luoneng, and founder of the Song style of Xing Yi.  Master Li Guichang was also part of the Song family since he was Dong Xuisheng's disciple.

Master Li's Xing Yi is primarily in the tradition of Liu Qilan, although certain aspects are derived from the Song style through Song Huchen. This is because Master Li's teacher, Dong Xuisheng studied both traditions. The training given in Master Li's Xing Yi can vary from disciple to disciple. For example some of them teach the Shaolin soft art he also learned from Dong Xuisheng, as well as the stick form Master Li created.

My teacher, Martin LaPlatney is a disciple of Li Guichang, and school brother of Song Zhiyong, and Tom Bisio.

The charts below are by no means all-inclusive.