When practicing the gentle, slow movements of Tu Na Si Ba, one effectively "breathes out the old and takes in the new" (Tu Gu Na Xing). This combination of inner-directed movement and breathing builds up Qi in the body, while simultaneously strengthening the tendons and bones. Every aspect of Tu Na Si Ba directly connects to the spirit, internal mechanics and martial techniques of Xing Yi Quan. The practice of Tu Na Si Ba is particularly critical to understanding and developing skill in San Ti Shi and Pi Quan (Splitting Fist), the core practices of Xing Yi Quan.


All students begin with this deep and compact foundational set, said to be developed from the Marrow Washing and Tendon Changing classics by Great Grandmaster Dong Xuisheng, who was not only a renowned boxer, but a gifted doctor of TCM (Traditional Chinese Medicine). The set was further refined by his very gifted student, the legendary Grandmaster, Li Guichang. It is a health maintenance set, but also a great aid in developing Shen Fa (Body Method) in this particular style of Xing Yi Quan. This set makes many changes in the body, giving relief to old injuries, and allowing control of muscles and joints in a way that is often difficult to do with the conscious mind. It is an excellent set for rehabbing injuries, and in preventing re-occurrence. Postural dysfunctions are addressed, spinal integrity is improved and maintained, and tendons, ligaments, and bones are strengthened. Some students and practitioners who cross train in other disciplines have noted that Si Ba has helped improve performance and mechanics in those disciplines or styles. Tu Na Si Ba is useful to practitioners of any style or body-mind discipline, from martial arts, to acting, sports and so on, and can be incorporated as part of any daily practice. As my teacher has often stressed: “It [Si Ba] is sometimes misunderstood as only being about the Yi (Intent) regulating the breath, and having no martial function, only a health benefit. This is incorrect. In fact, it develops all of the movements of the body that are essential to martial usage as well as developing instinct and awareness. I would also add that I believe Tu Na Si Ba develops an awareness and control over the fascia. Tu Na Si Ba, along with San Ti Shi, is how the feeling of an elastic body within the body is developed. It is also how the vibrating shock power of Xing Yi is achieved.”

​San Ti Shi is the standing (Zhan Zhuang) practice unique to Xing Yi Quan, and is a fundamental part of Xing Yi Quan (shape-intent boxing) training for both beginners and advanced practitioners. San Ti Shi develops exterior softness and interior firmness. Whole body power is developed as well as the ability to produce and issue Fa Li (Shocking Power). San Ti Shi addresses postural dysfunction, develops the proper alignments and mechanics for martial application, and functional movement. Upper and lower body are unified, the integrity of the spine is maintained and utilized, awareness expanded. Adhesions in the soft tissue are often broken up, the joints opened, the tangles untied, and a strong flexible body developed. There are many health and martial benefits associated with the practice.

The Five Elements or forces are the five fundamental shapes and movements from which innumerable applications arise. Pi Quan (Splitting Fist) represents the element of metal, and is the primary or “Mother” fist. The energies and shapes of all Five Elements stem from and are present in Pi Quan. The Elements are practiced in fixed, stake, advancing, and follow step patterns along straight or diagonal lines. The Elements are not to be viewed as tidy individual techniques. The Elements are distinct, yet flow one into the other, in varying combinations, with the stepping, in spontaneous application as the natural boxing skills and Shen Fa (body method) is developed. Over time, all martial applications will be expressed from the Five. The other Elements are Tsuan Quan: Drilling Fist (Water), Beng Quan: Crushing Fist (Wood), Pao Quan: Cannon Fist (Fire), Heng Quan: Crossing or Transverse Fist (Earth).

Each fist, shape, or phase corresponds to an internal organ and corresponding body systems. Pi (Metal/Lungs); Tsuan (Water/Kidneys); Beng (Wood/Liver); Pao (Fire/Heart); Heng (Earth/Spleen). Aside from martial application, practice is said to have many health benefits. 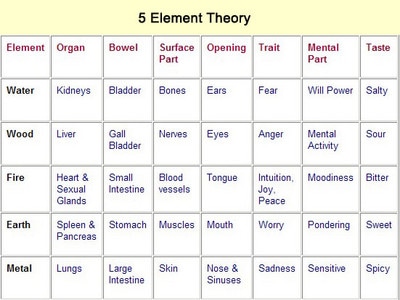 ​An advancing-retreating-linking form combining all Five Elements. All styles of Xing Yi Quan incorporate a version of this form. It contains all five elements, some of them expressed in animal form. It teaches range, flow, control, and various other fundamentals necessary for combat application.

Push hands or "Sensing Hands" is an important two-person training routine practiced in all Chinese Internal Martial Arts including Ba Gua, Taiji Quan, Liuhebafa, and Yiquan. Push Hands develops leverage, rooting, reflexes, sensitivity, timing, coordination, positioning, listening,  yielding and issuing skills without using force against force. It's a fun and controlled routine to test what has been learned in the foundational curriculum, and for learning combat applications, e.g. strikes, locks, grappling. Push hands is a training exercise, but it's also a bridge to free fighting. Push Hands is also a competitive international sport.

To truly understand the martial benefits, you must be able to really apply the art in an actual fighting situation. Push Hands helps develop those skills. Depending upon how it is taught, Push Hands is just as important as sparring, teaching how to use and stay within the art under pressure.

Sparring will also be part of the curriculum for those that have completed the foundational training and are willing and able. It is not a requirement. Sparring is controlled, and a way of testing skills. it is not an expression of ego and we do not seek to injure each other within this school environment.

​Dragon, Tiger, Monkey, Horse, Water Lizard or Alligator, Chicken, Sparrow Hawk, Swallow, Snake, Tai Bird, Eagle and Bear. In some Chinese martial arts, individual animal forms may consist of many complex movements, but Xing Yi Quan seeks to capture the essential internal mechanics and spirit of the animals doing one of the Five Elements, usually Pi Quan. The forms are short and compact, consisting of a few essential movements repeated many times in a line. Practicing the animals opens up the mind and spirit to different ways of expressing the Five Elements in combat applications. A single form can lead to a hundred applications. The goal is what internal martial arts refers to as "Natural Boxing." Spontaneous application or expression, one form phasing into another, manifesting according to circumstance, not a gathering of fixed individual techniques. It has been said that practitioners may only really reach that level with a few of the animal forms, determined by an individual’s personality, and spirit.

​A linking form similar in length to Lian Huan comprised of some of the same movements mixed with various animal forms, and advancing-retreating steps. Ba Shi Quan is often paired with Lian Huan and practiced in alternating lines.

​A two man form, more complex than Wu Hua Pao, utilizing the Five Elements. Like Wu Hua Pao, Pi Wu Xing teaches sensitivity, timing, strategy, and range with advancing-retreating steps. Its purpose is to help develop fighting skill within a controlled form. It is done with the same sensitivity as push hands.

Spear will be taught to those who have interest and have completed the foundational curriculum.
​*Master Li's Xing Yi Quan (shape-intent or form-mind boxing) is primarily in the tradition of Liu Qilan, although certain aspects are derived from the Song style through Song Huchen. This is because Master Li's teacher, Dong Xuisheng studied both traditions. The training given in Master Li's Xing Yi can vary from disciple to disciple. For example, some of the disciples teach the Shaolin soft art he also learned from Dong Xuisheng, as well as the stick form Master Li created. ​