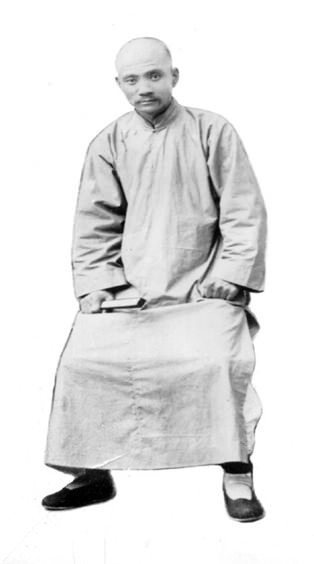 ​Dong Jun, also literally named Xiusheng, born in 1882, was a native of Dong village in Taigu county, Shanxi province. His forefathers were assistant ministers. Chinese medicine was taught in his family. His father, Dong Fang Lun (?-1926), practiced medicine, traded antiques, and also liked to train in the martial arts, often travelling to Beijing, Tianjin, Liaoning, and other towns, in order to practice medicine, and to engage in trade. Later, he settled down in Beijing and was then nicknamed “Shanxi Dong.”

Master Dong Xiu Sheng was clever and smart. He studied poetry and literature from childhood. As a child, Dong and his brother, Dong Jie (literally named Zi Ying), studied martial arts under their father. Dong's father silently adored him because of his nimble, vigorous, and stable skill. At the age of twenty, he made progress both in the martial arts and in literary ability, and began to travel with his father. After his father died, Dong Xiu Sheng traveled to Beijing, Tianjin, and Liaoning with his school brother, Shi Rui Ting, to practice medicine, to visit friends, and train in martial arts with various masters.

In 1918, Dong returned to his hometown and was invited to be a Chinese medical doctor at a hospital in Shanxi. Later he was invited by the Shanxi Mass Education School and Shanxi Martial Arts Promotion Association to work as a teacher of the martial arts. After Japan invaded China, because of an unstable political situation, loss of his work and livelihood, and an addiction to opium, Dong died in poverty in 1938 at the age of 58.

Master Dong studied various styles of the martial arts, was thoroughly acquainted with martial theories, and very skillful in martial techniques. In his childhood, he studied with his father and many other martial artists in his hometown, Taigu, where he learned the local traditional boxing skills, weapons and Xing Yi Quan. After he grew up, he traveled to learn with many masters in many places, developing subtle and profound skills so that increasingly his name became well-known.

​In summer of 1925, Mr. Dong compiled a book, Shaolin Five-Element Soft Style Manuscript, saying in his foreword: “In 1901, while traveling to Yanjin (the old name for Beijing), I met with Mr. Li Zhi Ying and started to learn the five-element gentle arts. In investigating the origin of Shaolin Five-Element Soft Style, it seems it was learned by a Shaolin Buddhist Master Miao Dan. He kept this art secret for three years and never taught it to anyone. Therefore, not many people learned it. In the study of the original theory of this art, it is the as same as explanations of yin and yang and the five elements. Although it is called 'Shaolin Gentle Arts,' it starts and ends with Qi Gong as its fundamental principle.”
Mr. Chang Zan Chun, a native of Yuci county and a famous calligrapher of our province, and Mr. Li Jin Wen (literally named Li Xun, 1891-1959), disciple of Mr. Dong, also wrote a foreword to this book. Li’s foreword states: “In the reign of Emperor Qian Long of the Qing Dynasty, when the Shaolin temple in Fujian was destroyed, Buddhist Master Miao Dan collected alms everywhere in a hope to restore the temple to its original status. He traveled into Tongzhou, a county where there are many martial artists. Mr. Li En Yuan, who was especially fond of attacking and defending techniques (i.e. martial arts), figured out that Master Maio Dan had a magic art and invited him to stay at home in order to learn the art. After studying for several years, he learned all the marvelous skills. The master knew that he had obtained them and went away. But, the Shaolin temple was not restored and afterward Master Miao Dan could not be found.”

​The master [Li En Yuan], passed down the art to his third generation, his grandson, Mr. Li Zhi Ying, literally named Li Jie Chen, and nicknamed Jia Jia Li. He opened an escort (bodyguard) agency and was well-known inside and outside the Sanhaiguan region. Mr. Li Jie Chen passed down this art to Monk Li Yuan, Liu Song Qiao and Wang San from Tong county, and Mr. Dong Jun (Dong Xiu Sheng) from Taigu county. Master Dong Xiu Sheng, also studied Xing Yi Quan with Mr. Geng Ji Shan for over twenty years and profoundly understood the mysteries of the boxing art. Master Dong was also skillful in medicine and worked in  a hospital in Shanxi.